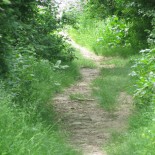 “We are not cisterns made for hoarding, we are channels made for sharing.”
Billy Graham (born 1918)

I’m not sure what the context of Billy Graham’s statement, above, was, but I am pretty sure his intention was more spiritual than the way I am interpreting it here. The quotation fits my purpose well, as I try lighten my physical load and share my reflections, as well as my excess stuff.

My  husband and I have been married for 41 years. We have bought a lot of stuff, and we haven’t thrown much out, despite moving 14 times during though 41 years. I wouldn’t say we are hoarders–hoarders never admit to being hoarders-but we have a lot of books, records, CDs, VHS tapes, DVDs, magazines, newspaper clippings, photographs, slides, and memorabilia. And arts and crafts supplies, sewing and knitting supplies, sheet music, and musical instruments. And stuff related to work we once worked on and ae re still working on, and some stuff that belongs to the kids, who no longer live at home.

I have been working diligently all summer, tossing stuff, donating stuff, clearing things out, but there still is a lot to do. The other day I found the front page of the Memphis Press-Scimitar from Friday, May 12, 1978. 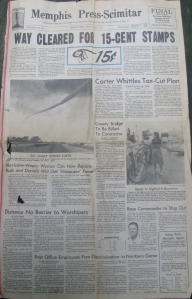 Rather than simply throw it out, I decided to ask my husband why he had kept it. The big headline was about the price of stamps going up from 13 to 15 cents. The price of the paper was also 15 cents.

Today, the local paper on the Cape is $1, and the price of a first-class stamp is 45 cents. And the functions of both can be replaced for free on the Internet.

Also on the front page was an article about the decision to start giving masculine, as well as feminine names to hurricanes. There was a photo a tornado funnel cloud in Oklahoma.

I couldn’t imagine why Glenn had decided to save the paper. When I asked him, he pointed to the other photo on the front page, one that I had ignored. It was of me. It was Bicycle Commuter Day in Memphis, and the  photo shows me with my bike accepting a balloon from one of the organizers to call attention to the event. I look very happy. 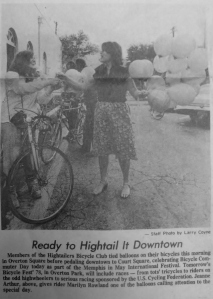 After I had decided to write this blog post and found my Billy Graham quote, I decided to read the other stories on the front page. Amazingly, there was a story about Billy Graham. He was holding an eight-day crusade in Memphis. 37,000 people attended the event at the Liberty Bowl Memorial Stadium. The article quoted him as talking about the role off conscience, saying conscience is the greatest proof of God’s existence since it shows what is morally right. I’m not a religious person, but am happy to agree with Graham about the importance of having a conscience and abiding by it.

Also on the front page was an article about President Jimmy Carter’s tax cut plan and a commotion over a “bridge to nowhere.”

On the other side, page 2, there was a story about the increasing problem of women in the Army getting pregnant due to “the creeping advance of sex fraternization throughout the Army.”

Also on page 2, a story about Richard Nixon’s memoir, “RN,” was not selling at local book stores. Not not selling well–not selling a single copy. Lillian Carter, the president’s mother, was traveling in New York, and Suzy Chafee was upset about stories in the press linking her romantically to Edward Kennedy. 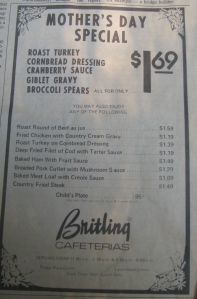 Britling Cafeteria advertised a Mother’s Day Special: Roast turkey, cornbread dressing, cranberry sauce, giblet gravy, and broccoli spears, all for only $1.69. I cannot remember a meal being that inexpensive, even 34 years ago, but I do remember buying a week’s worth of groceries for $16, $4 a grocery bag.

Ah, well. It was nice of Glenn to save the newspaper page. I think I might go for a bike ride. No Bicycle Commuter Day for me though–I work at home now.

This entry was posted on September 13, 2012 by Marilyn J. Rowland in Uncategorized.